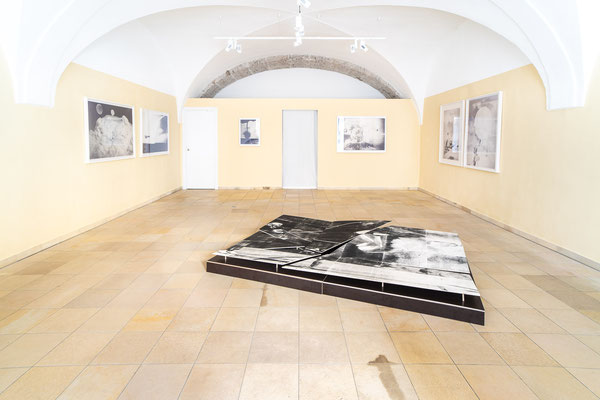 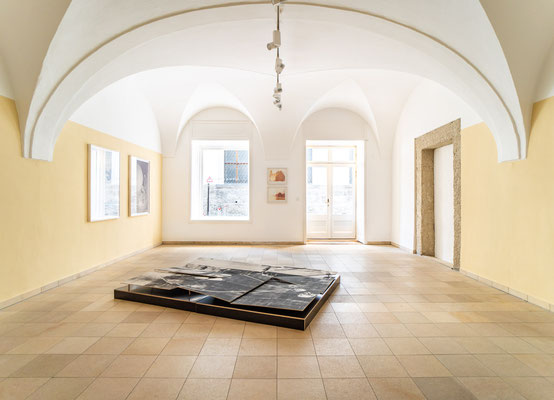 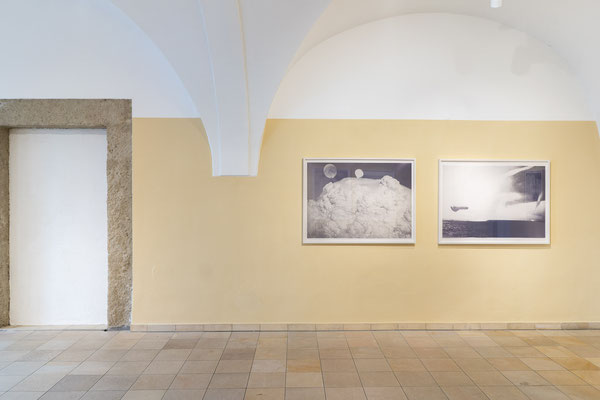 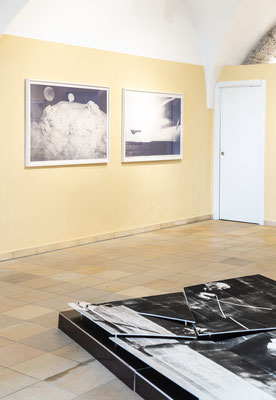 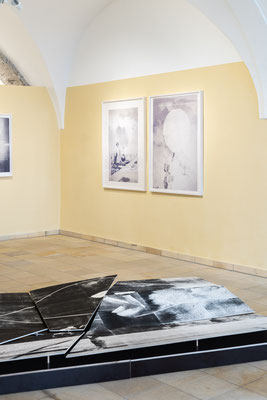 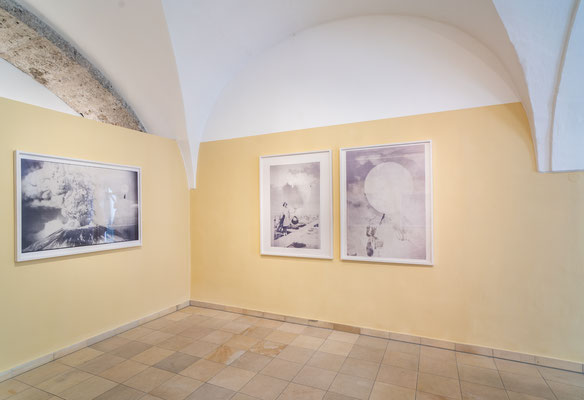 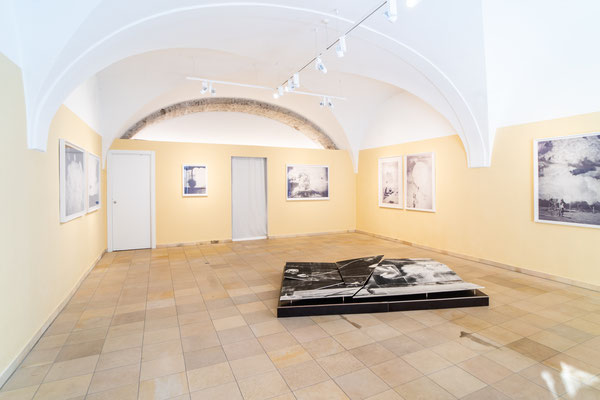 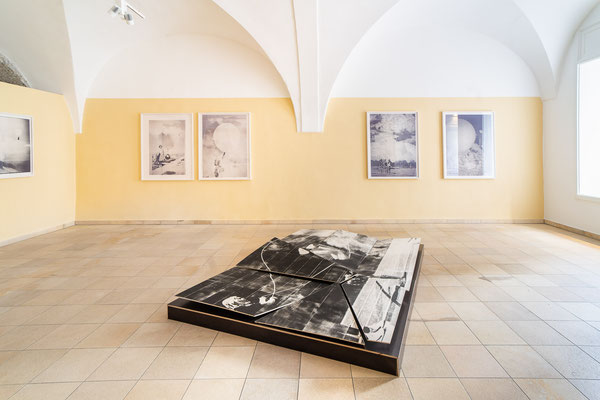 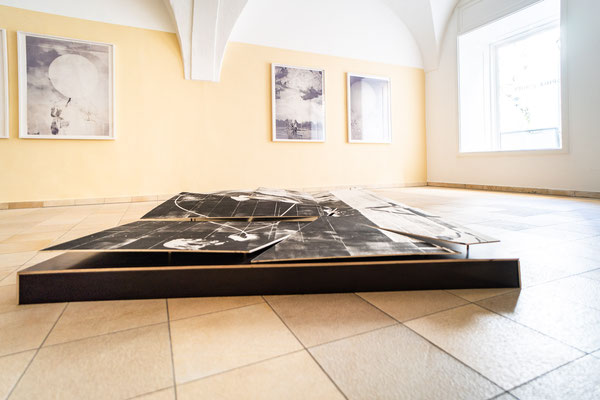 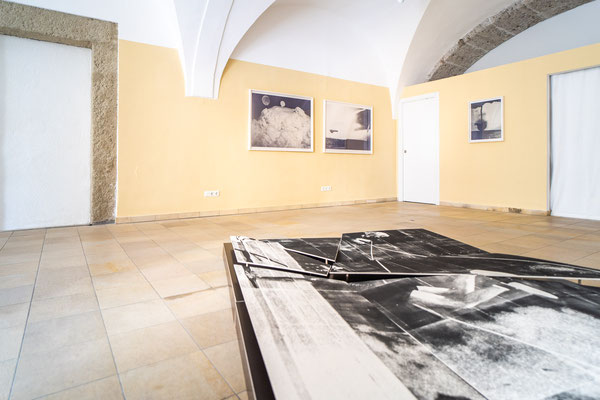 "dream of being in the air"¹ In rope jumping and high diving, the weighing of current conditions meets concrete planning. If this applies here to the jump, it could equally be read as a political metaphor. Where in Elfriede Gerstl's line quoted at the beginning there is a desire for resolution, in Elisabeth Schmirl's work it is concrete bodies that exist in this tension.

"What are the clouds?"² the puppet Othello asks another in Pasolini's short film of the same name as they gaze up at the sky-and gets no answer. Because words cannot grasp what is. In the film, the philosophical conflict sometimes arises from the difference in class and knowledge between the proletarian audience of the puppet theater and the artistic aspirations. What is thematized here on the basis of difference in social status shifts today to an economic level. By using a historical photograph, Elisabeth Schmirl's work refers to the connection between the Great Depression and the rise of the so-called "Hoovervilles," slums in the United States, and thus to the close connection between economics and living conditions. Stock market speculation as a failed calculation of economic developments manifested itself in these buildings. If such unpredictable effects are omnipresent today, the basic assumption of the rational calculability of the future remains. Elisabeth Schmirl uses the diazotype for her works, a technique for copying floor plans and blueprints that was widely used until the 1990s, and thereby turns the idea of predictability into its opposite: she is not interested in precision and faithfulness to scale, but in the uncertainty of this technique, which results from the UV sensitivity of the material. Clouds, fog or smoke represent the pictorial counterpart to this technique. More strongly than in Othello's question, these elements become questionable: as obscuring the image, as openness, as a void, as a trace.

"A new morning - the weather's changing"³ diffusely raises another question: why is it always women who hold the weather balloons? This subject, which appears several times in Elisabeth Schmirl's works, was currently seen more often again in everyday life. The weather data, which is now provided by air traffic as standard, became less during the pandemic, which is why weather balloons were used more frequently for measurements. Showing these objects right now and putting the task of predicting the future in the hands of women feels like empowerment. After all, stereotypically, despite all efforts to the contrary, the rational and predictable is biased toward the male pole, while the feminine is ascribed mysticism, magic, and irrationality. The strongest reference to this lies in the blindfolded eyes of one of the characters. At the same time, however, this applies to the special clear-sightedness of the oracle, which precisely through blindness connects the irrational with fulfilling foresight. The women with weather balloons, like the clouds already, bridge apparent opposites; make the ostensibly rational more obscure and the unpredictable part of our world.

"The trace is the presence of that which was never actually there, of that which is always past."⁴ Architectures, as traces of human decisions, embody the destructive force

of the rational as well as the belief in the ability to plan and speculate with the future. In Elisabeth Schmirl's works they become veiled and unclear, clouds, dust and fog, which disturb as an untraceable trace this structure of an explainable and calculable world. In contrast, the prediction of the weather, the planning of a jump are metaphors of lightness, which carry the uncertainty of planning as well as the openness of traces to be everything and to be interpreted always anew. The leap, the weather balloon, clouds - they all point in the direction of utopian thinking, in which the concrete traces of our actions are always inscribed.